skip to main | skip to sidebar

Karamazov Tapes! and such!

All Cassettes $6.oo post-paid in the U.S. Contact us for over-seas shipping. Thanimals! 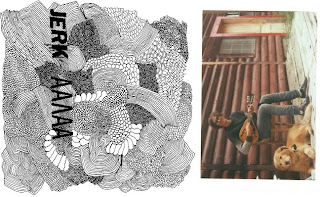 New Jerk album coming out this winter, "AA^AA", roughly.
Here is a preview, the great pop ballad "Limbless".
If you would like to donate to this project, just email me: andycigarettes(at)hotmail.com, and we can set up arrangements.

Or you can donate here via DER PAYPAL:

Posted by andycigarettes@hotmail.com at 11:49 AM 1 comments 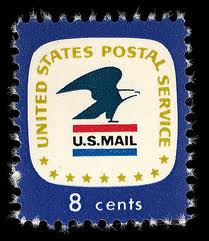 Do you like mail? I'm going to start sending out some new music from my archives and new things in perpetuity. Would you be interested? Send me your address, and I will randomly and eventually send you something. Also, if you wish to donate to defer postage, feel free, but it's not necessary, for this is a labor of love. Email me your address if interested. andycigarettes@hotmail.com.

Posted by andycigarettes@hotmail.com at 12:10 PM 1 comments

We got a couple of these albums back in stock. Originally released in 1998 on Columbia, Missouri's Junkpuncher cassette label.

What the critics are saying:
"What is JERK? Is it an infinite put on? Are there any true revelations, or is it in fact just messing with our heads? Kind of an Indy-punk folk mesh, it jilts you out of the pop form structure, and in fact, JERKS you away from a natural denouement that leaves you wondering what it all means, and also leaves you whistling a little traditional pop-hook. What a freakin' Jerk!"-Brian Laurent, Bloominton IN.

Karamazov is offering this momentarily, until the new website opens up for the all things Jerk archive that you probably haven't been waiting for. 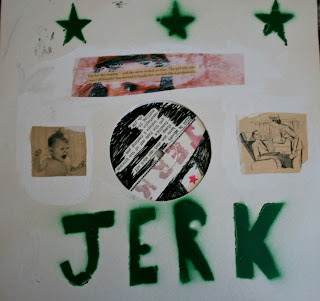 Each cover is hand painted and collaged and each are a little different. Just like your favorite puppies. Aw.

Posted by andycigarettes@hotmail.com at 4:14 PM 0 comments 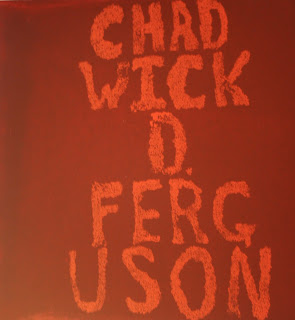 Posted by andycigarettes@hotmail.com at 12:39 PM 1 comments 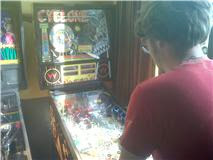 It's out! Hand Screened covers by Raskolnikov. Get it now. $13ppd.

Posted by andycigarettes@hotmail.com at 11:51 AM 6 comments 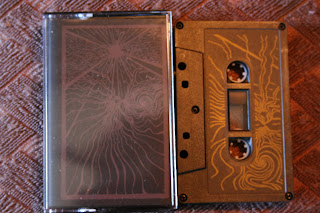 Posted by andycigarettes@hotmail.com at 10:47 AM 0 comments

This is The old catalog. The archive. Some of this stuff is still around, so if you are really curious, drop us a line. Thanks. 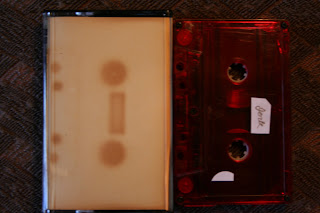 The loud companion to "Your Million Brazilian Tour Mix-tape", Jerk takes on the skewed pop form and moves it about in a rotting painting all under 18 minutes. Where "YMBTM" languishes and relishes long silence and space, "Greypuke" takes it all back and sputters and shivers across all of its "tracks". 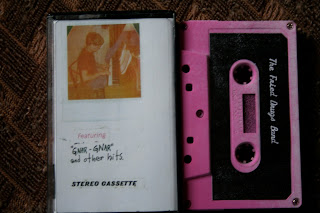 Pushing their their way toward an inner Valhalla, via Cleveland, Fried Drugs come home. As several developments in jazz in the last few years have shown, no one really needs to state all those chords that nearly everyone uses, and as some events have shown, if someone does not state them or if a soloist implies them, he may end up with a harassed running up and down scales at those "advanced" intervals like a rat in a harmonic maze. Someone had to break through the walls that those harmonies have built and restore melody-but, again, we realize this only after Fried Drugs has begun to do it 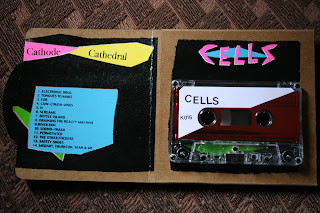 Finally out, this recording fraught with complications since it's inception, is now finding its place among the walls of your bedroom. Hardcore jazz drumming, thrumming, screaming. Recorded in the summer of 2006. 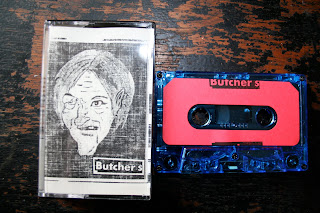 Haven't heard this a lot lately. Punks from the Kansas to the City create wobbly wandered post-neil young anthems if you recorded them at night during a three ring battle clipping the clods a clots. Finish might make you Swedish, but then the joke would only not be on you. Can't get that Grandpa mask outta the attic fast enough. Look, it's YOUR life! 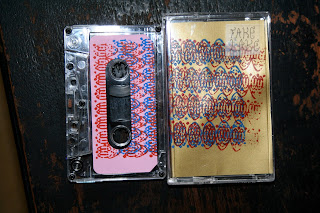 Trio outta Chicago and Baltimore and more. Whirling Sax, bass, and drums. If Black Flag had decided to turn into Jazz, it might sound like this. Recorded live at Valentine's in Portland for the 2009 T.A.M.E.S.S. tour. Fake Lake, I love you. Will you go to the prom with me? This is our limousine. 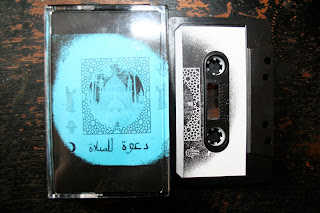 Kansas City moment collector Jeffery Rocketmild summoned this prayer with the help of a few charged friends at his roost on Troost. At times, the bass takes a repeated walk on water, other times this piece is carried away by the Siroungi's song. Psychic times. 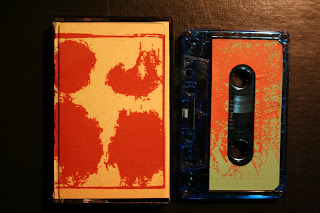 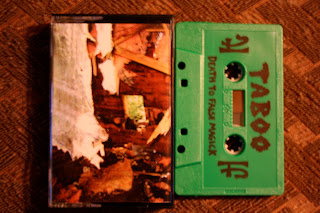 Taboo is a really vile band. This recording is so thick and it goes so deep that it makes me want to shit. They have little to no internet presence and I've never seen 'em live (though they do tour), so this tape is all I have to go on. What I do know is that they are three semi-humans and they are from Troy Maine, but even that might be incorrect/more than I'm supposed to know. This a fucking long tape! One side is a murky and relentless "studio" session and the other is cleanly recorded (but not preformed) live set that gives you a little more insight on the instrumentation/sound of the group. Hallmarks of that sound are: throbbing percussion, relentless feedback psych guitaring(?) a la Les Rallizes Denudes, wretched screaming vocals with a heafty ammount of effects. This band ain't pretty and should appeal to fans of Wolf Eyes/Hair Police. I would prefer it if the vocals came through a little better because they are totally sick, but it's hard to find fault with a band this committed to making you feel so totally unpleasant. At 90 minutes you really can't go wrong with this baby and it is the strongest and most unique of the six things we got from the label.
-http://cassettegods.blogspot.com/ 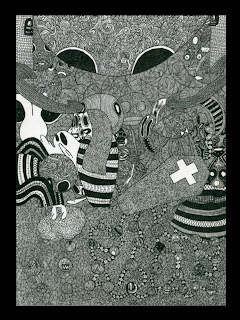 Cool stark slowish ballads from a Sacramento crooner. Take this camping and watch the woodland animals gather around the fire and drink yr whisky with you. Like a sweat on yrself, as you you you turn in. 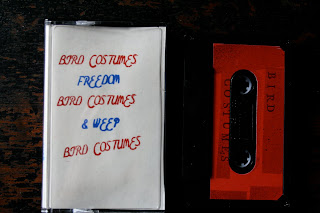 Arpeggio loops that are maybe guitars pitched up or keyboards? Sounds like its going to be a typical loop pedal party of 'loop a' over 'loop b' so and so on until it's 'intense' and maybe feels 'new age' or something, but instead these remain some sort of song, with the first track sounding like some sort of new romantic / college rock thing complete with misanthropic / apocalyptic lyrics all accompanied by tight drumming.

I imagine this being performed with 'lighting' and maybe even smoke and the singer / guitarist looking at the crowd a lot and never changing their facial expression while they play these dark and brooding guitar lines / loops. In a perfect world the loops would be taken care of by two keyboardists with pale skin, maybe one of them is androgynous.

The second side takes a little bit of a turn (unfortunate for me because i was having so much fun imagining their 1983 stage show). The structural use of the looping is traded in for minimal piano and reverbed out vocals that chase the melody played on the keyboard and, along with the melancholy, has traces of some consonance. The next track fulfills my dreams of darkness, dropping a textural metallic steam bath that morphs into a loose poetry like sing songy bit that feels like it was recorded three inches off the ground making everything wobbly and a little out of focus. 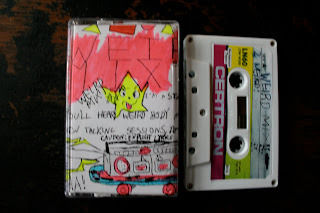 OOH how! Another installment from the cranium of genius. Get this one and put it in yr bathroom and crank up the stereo. On the pot, or in the shower, while away the time and be very funny! Ha! 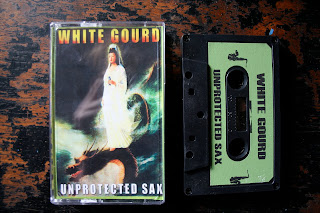 Our L'il Wayne! runaway hits by the trackingest Sax player to hit this twine. Sudan of Million Brazilians creates layers of haunt and a jaunt to the stars. Play. 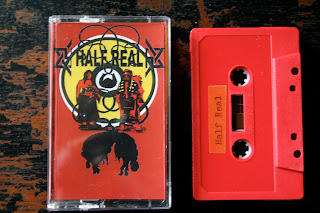 "Don't Believe it, it's only half-real" duo collaboration with G. Corum, Million Brazilians guitar player, and FiFe of New Hampshire. Listen with a glass of port and a mind of ease. 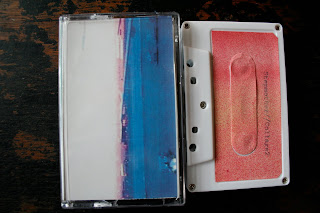 Next release after the fabulous and influential Collage I. In the same vein, but better? Butter. People: Stepmother is a force to be reckoned 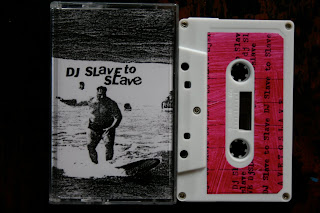 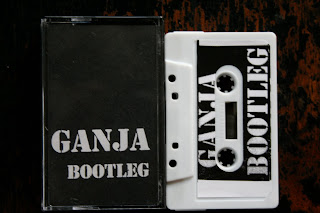 Total Stumper. Sounds to all the world like a lo-fi, nth generation audience cassette of some Hawkwind-damaged metal group." Byron Coley, The Wire. Members of Taboo and Mating Dance. 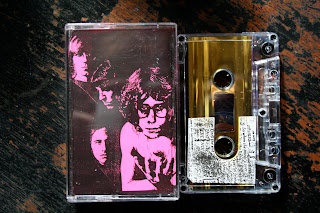 Long awaited Collaboration between these two behemoths recorded for the Doors' 2003 reunion tour. As seen on The Tonight Show w/ Jay Leno. 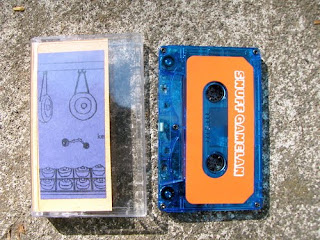 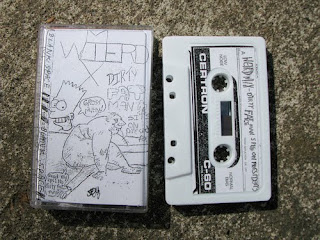 Aloha!!! remember when you were eleven and you and yr buds got together and made fart-y sounds and did the Bartman and screamed and recorded it all but then whatever yr mom threw the tapes away or you moved and lost them? Well, luckily for us, the mad geniuses behind Weird Mix held onto those tapes, and now the world can know!!! 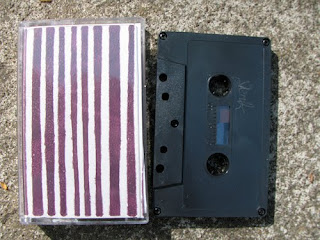 A strange and wonderful world unto itself, this tape is the "lost" L.P. of a 4-tracker bedroom weirdo, recorded 10 years ago. "Trouble" is equal parts ramshackle pop songs and audio experiments, both calming and disturbed, all radiating the aura of a found object." Raf Spielman, Eggy Tapes 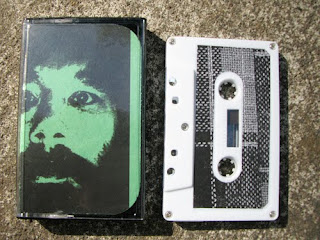 Seth and Amanda might be a duo from Kansas City. This tape is a long-form exploration of homemade electronic noise, mangled synthesizers and strange radio transmissions. On the one hand, it's pretty harsh stuff, on the other, it's relatively restrained; each
noise and texture has room to breath. Lots of cool sounds and moments of weird beauty on this tape." Raf Spielman. Eggy Tapes 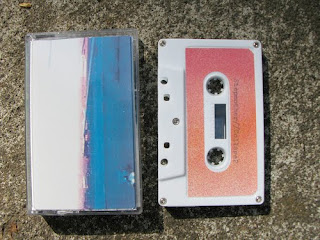 Oregon teen electronics by Forrest Wright include some weird sourced sounds, combined with a compositional dynamic that feels like a little electronic festival held in an underwater grotto. Moves to many bubbly places for a one-sided tape." Byron Coley, The Wire

Posted by andycigarettes@hotmail.com at 2:43 PM 0 comments

Thanks for finding us. We are expanding into other realms shortly and hopefully. You are the best!!!